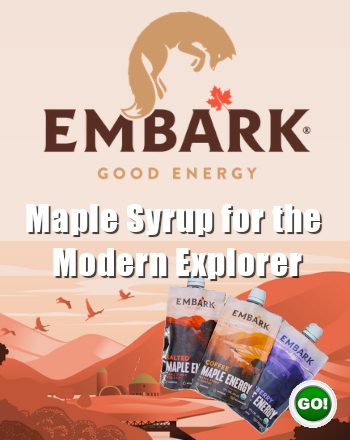 As the world closed the grim chapter that was 2020, Executive chef, Mary Kastman and the team at the Driftless Cafe prepared an eight course New Year’s Eve dinner themed, “Resilience”. In a year that devastated the restaurant industry, Mary says she’s learned about relying on the kindness of strangers. She told me a story of a farmer comping their entire greens order one week because he knew the restaurant was struggling through the shutdown. It brought her to tears. To type it brings me to tears as well. This is the food community I know and love, entangled and thus supportive and resilient. 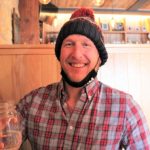 The ties between the Driftless Cafe and our farm, Keewaydin, have woven us tightly together. The cafe has been sourcing produce from us since they opened and I’ve personally hucked hundreds of boxes to their backdoor. In the fall of 2019, when the farm was in one of it’s leanest seasons, the cafe hired my husband, Rufus, as a bartender and server. The extra income helped us get through a hard winter. Summer of 2020, when we were all going stir crazy from staying home, Mary organized a socially distanced farm field trip for her staff. She stressed the importance of their team knowing where the ingredients come from, appreciating the hard work that goes into them, and understanding the story of the people and places they bring into their kitchen. We walked through gardens and greenhouses with cooks and waitresses and told our story. They intend to share these narratives with folks who experience our produce in their entrees. These connections matter. These are the ties of resilience in the Driftless food community.

Mary Kastman, a Chicago native, moved to the Driftless for a slower pace, a different quality of life, and a more sustainable work culture. She’d attended college in Madison and worked at a high end restaurant in Boston but needed a change. “We were done with Boston. The traffic breaks you down”. As she said this, it dawned on me that I couldn’t remember the last time I really had to wait impatiently in traffic… a peace of mind I’d taken for granted. Mary and her husband, Eric, decided to skip the gridlock traffic jams which were slowly chipping away at their sanity, and drive themselves to Viroqua. They’d never been here, but didn’t want to go back to Madison or Chicago. They were drawn to the farm scene, the Waldorf school, and Wonderstate Coffee. They could see themselves here. Once they settled in, Mary took some time off to soak in her natural surroundings and felt deeply inspired by the culinary potential in the midst of such a bounty of ingredients. She told herself she wasn’t going to go to the Driftless Cafe because she knew the connection would lead to employment and perhaps she wasn’t quite through with her sabbatical of soaking in the Driftless. However, fate brought her face to face with owner, Luke Zahm, where so many food connections kickoff, the Viroqua Food Co-op. This particular meeting was a memorable one for Mary who vividly recalled Luke having his bloody thumb all bandaged up because he had cut it, not with a kitchen knife, but a band saw. They met at the end of February and had a two-hour conversation. Luke was taking on his new role with Wisconsin Foodie and wanted to make a shift to a woman-run kitchen. He knew nothing of Mary. She didn’t even cook for him, but he saw her potential. She started in March of 2019 and took over as Executive chef four months later.

When Mary came to the cafe, she began stirring her unique blend of education and experience into their ever-changing menu. As a graduate of the two-year culinary program at Madison Area Technical College, she was trained in traditional French cooking, but it was the Mediterranean that captured her heart and palate. She was living in Boston in 2011 when she came across an article in a food magazine on Oleana, a restaurant featuring inventive Eastern Mediterranean dishes, and decided to drop off her resume. She got an email the next day offering her an internship until a position opened up. This was her first introduction to Mediterranean food. My mouth watered as I listened to Mary describe one of the entrees that moved her senses; a scallop dish with white bean puree, preserved lemon, and a dukkah spice blend. She characterized it as both light and rich, but not rich in a way that makes you feel bogged down. It used olive oil and yogurt rather than heavy creams, different from the traditional French cooking she’d learned in school. It left her wanting more and opened up a whole new way of developing dishes. 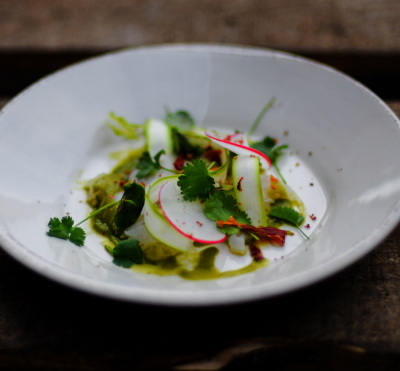 Travel has an uncanny ability to forge a love and understanding of flavors from around the world and Mary experienced her own Mediterranean immersion on a two-week visit to Turkey, Istanbul, and Cappadocia. The climate in this region affords a prevalence of fresh food we often miss during Midwest winters when all we have left from our gardens is that played-out squash sitting in storage. Perhaps it’s all that sunshine that also energizes the warm glow of hospitality Mary recalls, the generous smiles, flanking every feast. One meal, in particular, stands out in Mary’s mind as transformative. She and Eric had grabbed some “Daughter in Law’s Soup” and kabob sandwiches from Çiya Sofrası in Istanbul and were walking in the public market during the call to prayer. They could hear the voices in chorus, smell the raw ingredients of the open market, and taste the combination of spices on an ethereal level. “It was the religious experience of a sandwich”. She was entangled.

Bringing the Mediterranean to the Midwest is coming along slowly, but Mary “really” gets excited when she sees the greens of spring. This is her time to thrive. Farmer-led cuisine can have its challenges during the long Wisconsin winters when both squash and storage crops have lost their vigor. Let’s face it, these veggies have never been the stars of the table, and it takes a culinary mastermind like Mary to make you love eating butternut or cabbage in February, but somehow she does it. I imagine a voracious cookbook reader like herself (who gets pumped for the New York Times announcement of the best cookbooks coming out) has a filing cabinet of recipes logged in her brain. She has so many cookbooks that she began giving them away as gifts to the younger cooks at the cafe. Some of her personal favorites are Sababa: Fresh, Sunny Flavors From My Israeli Kitchen by Adeena Sussman and Jubilee: Recipes from Two Centuries of African American Cooking by Toni Tipton Martin. Mary emulates the Driftless region through her entrees, and if the dish is a success, it may go on the menu as a small plate. She says if it were up to her, she would only do small plates, a preference which harkens back to her altered perception of value; feeling stuffed vs. feeling light yet satiated. Small plates also have a communal characteristic Mary has been missing since Covid made us trade common space for comfort food.

The pandemic has demanded a jolting pivot from our friends in fine dining, where ambiance and artistic presentation aren’t easily packed into a takeout container. The cafe has had to diversify its menu while also keeping it accessible and affordable. They’ve added a burger night, Friday fish fry, kids menu, and $5 whiskeys, catering to the comforts Wisconsinites hold dear. Carryout is a huge part of the business right now, which has been a wide swing for Mary who draws a line between fine dining and takeout. “Fine dining is about the experience and the foods don’t travel well. You have to let go of the ego when you place something into a takeout container.” She tells me about how figuring out containers has been a whole thing. Finding all shapes and sizes of something compostable or sustainable that still holds up for the duration of the meal is no easy task. I sense a lingering sadness, a longing for the full expression of her culinary artistry which has been boxed into these vexing containers. She asks, “Is this the death of fine dining?” 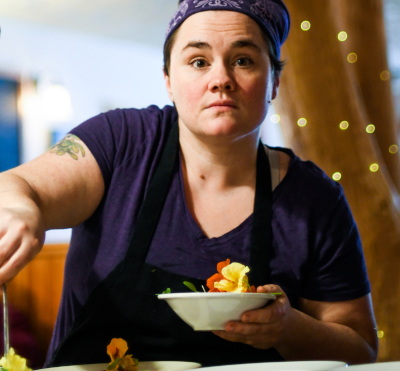 Despite the mounting obstacles of 2020, Mary strives to set an example of healthy kitchen culture by being encouraging and flexible. I chuckle when she says, “The old way is sabotage, fire, knives, and convicts. To be in the kitchen, you have to be a bit of an adrenaline junkie”. Mary’s way is more of a silent consternation vs throwing a plate or screaming across the kitchen. She wants it to be a safe space where people can feel comfortable making mistakes rather than being fearful to try. That means keeping her cool when things start to heat up. I can remember Rufus coming home frazzled from working a double shift at the cafe on a night they were slammed. There is a certain level of mania one must ride out during a rush, and Mary can ride that wave with the best of them. Being organized and having backup ingredients is key in the clutch and something she tries to instill in young cooks.

An exemplary mentor and leader in both the kitchen and community, Mary uses her culinary talent to uplift and bring people together. While living in Boston, she connected with an amazing community of women she describes as “inspiring, intimidating, and empowering”. This network of relationships encouraged her as a young chef and made a lasting impression about the importance of a supportive circle of women. Now she’s begun work to cultivate a similar support culture in the Driftless. In 2019, she started an event called The Queen’s Table, featuring five female chefs from Wisconsin collaborating on courses with ingredients from the seasonal harvest. Mary prepared a Moroccan pigeon pie (with duck), a delectable blend of spices, dried nuts, apricot, and brown butter. If there is one dish she hopes to see gain the staple status of the Organic Prairie Tenderloin on the Driftless Cafe menu, this is the masterpiece. Reaching out in collaboration can bring out the best of our creations. Mary understands this entanglement well, and although Covid crashed the party in 2020, the Queen will return to the table, rallying with farmers in resilience to feed and connect the people. 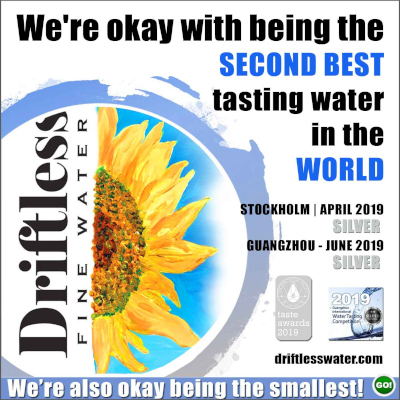 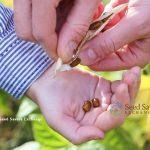 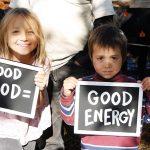 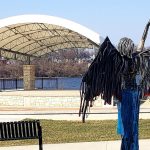 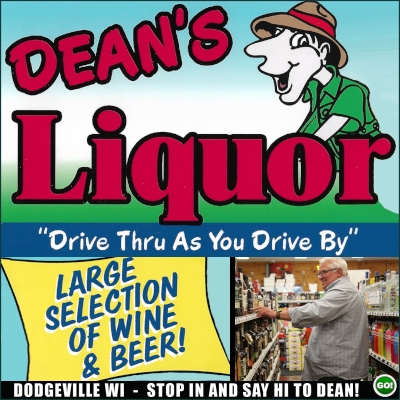